Oven-baked chicken recipes 2022 – how to make baked whole chicken with rosemary in 6 steps at home.

Easy baked chicken recipe to cook a whole chicken with simple and tasty ingredients such as rosemary, garlic, and more.

Learn in this cooking video how to make baked chicken using a tasty baked whole chicken recipe from scratch!

ENJOY cooking chicken from scratch! 👌
0
Did you ever make baked whole chicken?x
🔎 What is cooking? ⬇️

👌 How to cook baked chicken from scratch – video 📺

➡️ What ingredients do you need for the baked whole chicken recipe with rosemary? ❓

➡️ How to make a baked whole chicken from scratch? ❓ 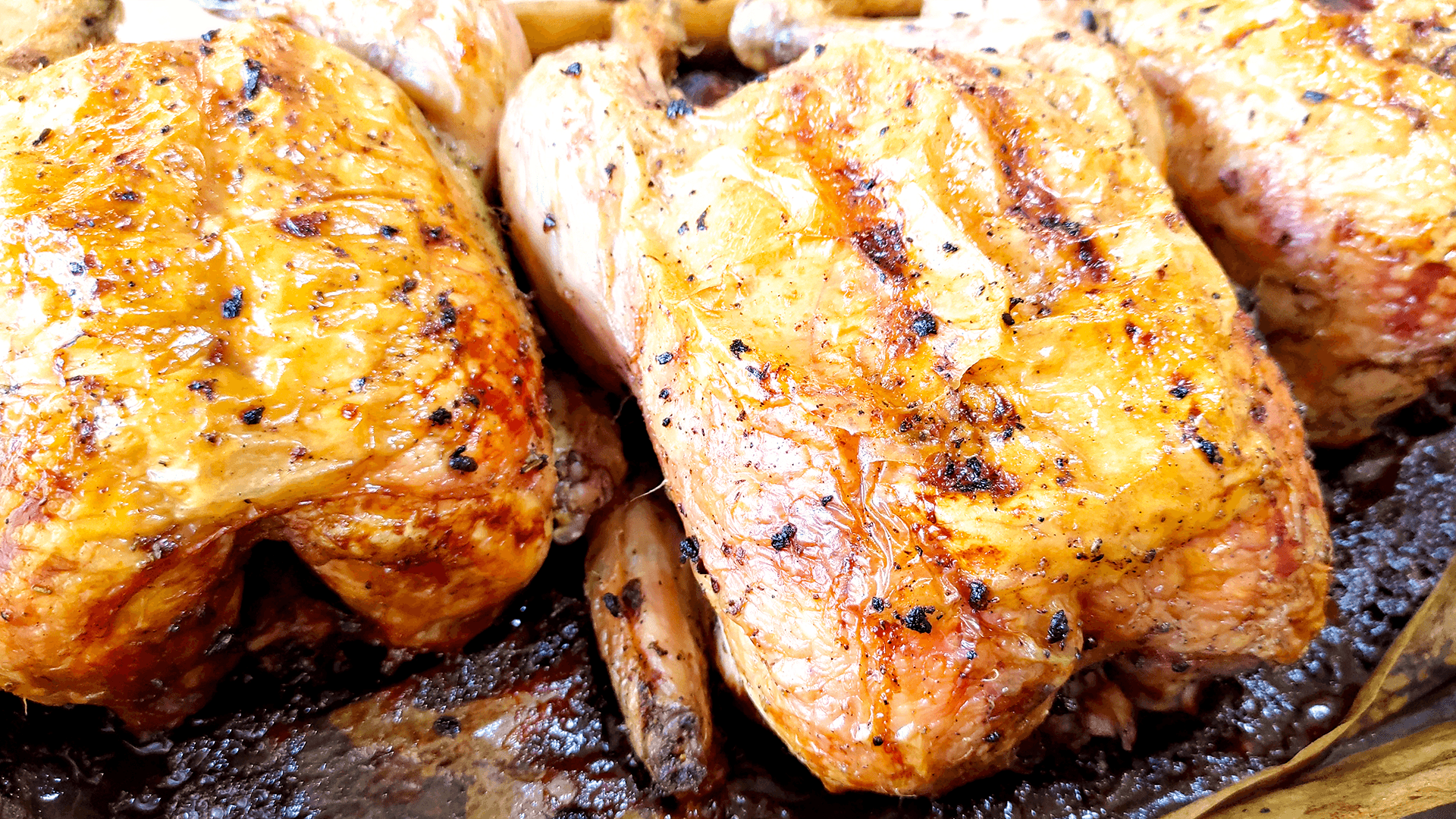 Step 1: rub each chicken with salt on all the skin
Step 2: put the crushed garlic in a bowl, then add black pepper and dried rosemary
Step 3: pour olive oil and mix the ingredients well
Step 4: brush each chicken with the previously prepared marinade all over
Step 5: place chickens on a tray lined with baking paper and put a rosemary sprig inside each (optional)
Step 6: put the tray in the oven and bake the chickens at 250 C/480 F until evenly brown

➡️ What is baked chicken? 🔎

“Chicken is the most common type of poultry in the world.[1] Owing to the relative ease and low cost of raising them in comparison to animals such as cattle or hogs, chickens have become prevalent throughout the cuisine of cultures around the world, and their meat has been variously adapted to regional tastes.
Chicken can be prepared in a vast range of ways, including baking, grilling, barbecuing, frying, and boiling, among many others, depending on its purpose. Since the latter half of the 20th century, prepared chicken has become a staple of fast food. Chicken is sometimes cited as being more healthful than red meat, with lower concentrations of cholesterol and saturated fat.[2]
Cooking
Chicken can be cooked in many ways. It can be made into sausages, skewered, put in salads, traditionally grilled, or by using an electric grill, breaded and deep-fried, or used in various curries. There is significant variation in cooking methods among cultures. Historically common methods include roasting, baking, broasting, and frying.
Western cuisine frequently has chicken prepared by deep frying for fast foods such as fried chicken, chicken nuggets, chicken lollipops, or Buffalo wings. They are also often grilled for salads or tacos.”
Read more on Chicken as food!

➡️ What are the health benefits of eating chicken? ⚕️

“Chicken is rich in a variety of important nutrients, including protein, niacin, selenium, and phosphorus.
Benefits
Chicken is rich in an array of important nutrients and can be an excellent addition to a healthy, well-rounded diet.
Given that chicken is low in calories but high in protein, it may be especially beneficial for weight loss if that’s a goal for you.
Studies show that increasing your intake of protein may enhance feelings of fullness, increase weight loss, and help maintain lean body mass.
When paired with resistance training, protein can also help promote muscle growth.
What’s more, protein is involved in calcium metabolism and is important for optimizing bone health.
Healthy preparations
Grilling, baking, and stir-frying chicken are a few of the healthiest ways to enjoy chicken.”
Read more on Is Chicken Healthy? Nutrition, Benefits, and Tips!

Chicken is one of the most consumed foods in the world. It is also highly valued by us and, therefore, huge quantities of chicken in various forms are consumed everywhere.

This is a lesser-known method of cooking a whole chicken in the oven and if you are wondering if the roast chicken will be tender, the answer is yes. Not only is the meat inside soft, but the skin is crispy and the taste is similar to grilled chicken or broiled chicken.

I use various spices for cooking chicken in the oven and one of my favorite combinations is the one that includes rosemary and garlic. Both go very well with chicken and contribute to a delicious taste that makes it hard to stop eating this dish!

As for the taste of rosemary, some like it more, others less. That’s why I use both its dry and the fresh version in the recipe. Those who want a more intense rosemary taste can introduce a sprig of rosemary in chicken so that its taste is absorbed better into the meat.

As you can see in the video, this baked whole chicken recipe is very easy. The cooking time is short, especially since after putting the chicken in the oven you can do anything else you want. Basically, you need about 10-15 minutes of seasoning the chicken and after that, you return to the kitchen just to enjoy the perfectly baked chicken taste!

Since it’s very easy to cook, I don’t have many secrets to share about this baked chicken recipe. However, I will emphasize one very important thing to get the best results when cooking this whole chicken roast recipe. It’s about the size of the chicken.

The bigger the chicken, the harder it will cook. Therefore, the ideal weight of the chicken when using this recipe is around 1.5 kg/50 oz.

Finally, I’ll tell you another secret that makes the baked whole chicken even tastier. After the skin is golden and you turn off the oven, I recommend leaving the tray in the oven for another 15-30 minutes so that the juices that form during baking are absorbed into the meat and make it even more tender and tasty.

Enjoy the baked whole chicken recipe with rosemary and garlic!

🔎 What are homemade meals? ⬇️

Homemade meals are dishes prepared using fresh and natural ingredients to create your meals and snacks at home. The benefits of making your own food are endless, from saving money to finding out exactly what is in your food and having control over what you eat.
But the biggest benefit of all is that it gives you the opportunity to create your own recipes and choose the ingredients that go into them. This means you can create homemade meals that are tailored to your health needs and culinary preferences!