Fried rabbit recipes – cooking rabbit in the pan in a sour cream sauce in 16 steps at home.

Easy fried rabbit recipe for cooking a rabbit with simple and tasty ingredients such as sour cream and more.

Learn in this video how to make a fried rabbit in the pan using a tasty and easy rabbit recipe from scratch!

Do you like fried rabbit? Write your reasons briefly!
0
Please leave feedback on this!x

➡️ What ingredients do you need for the fried rabbit recipe in sour cream sauce? ❓

➡️ How to make a fried rabbit recipe in a sour cream sauce from scratch? ❓ 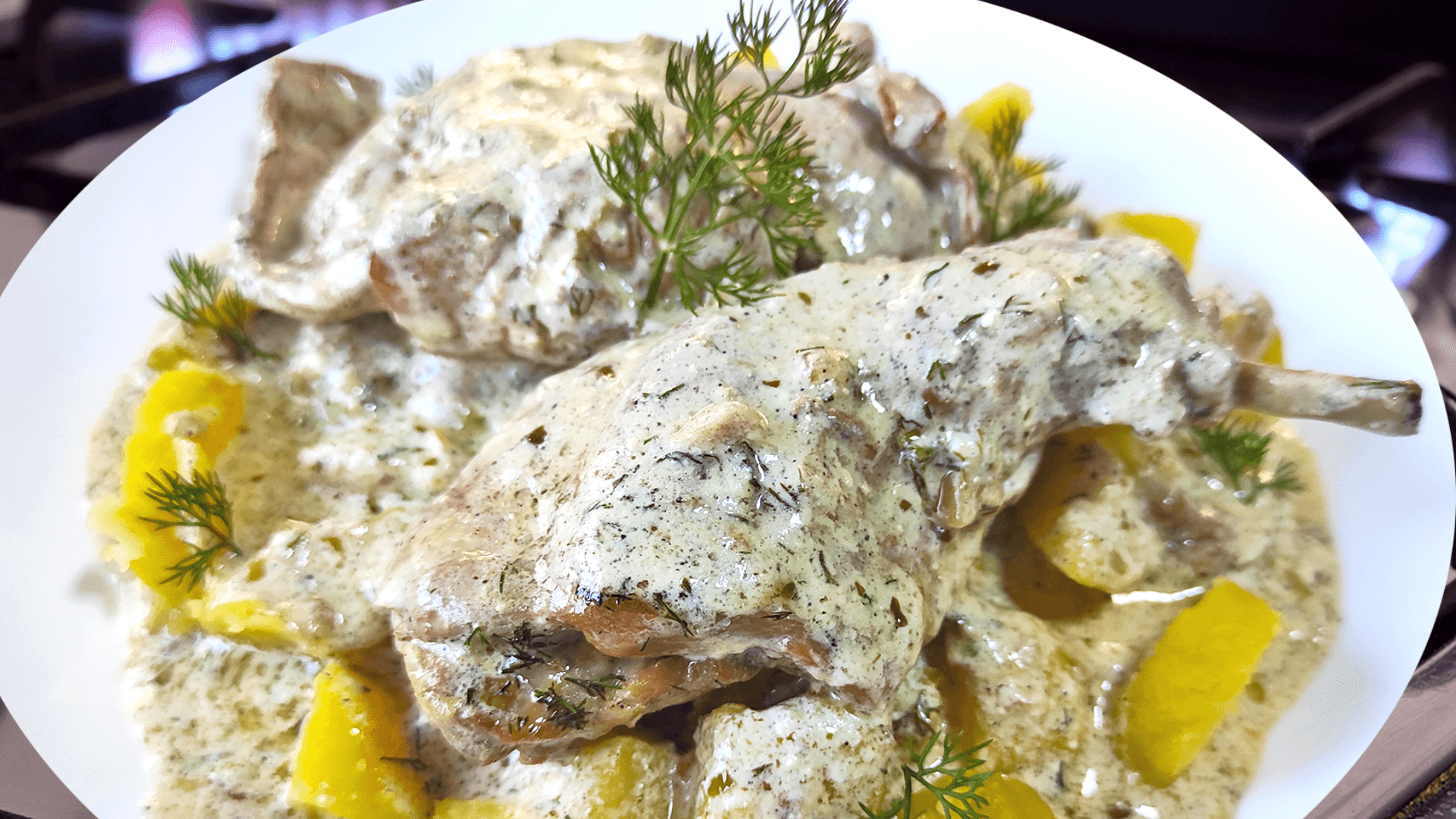 Step 1: cut the rabbit into 6-8 pieces
Step 2: pour oil into the pan and wait to heat up
Step 3: place and fry the rabbit pieces at a high temperature until golden brown (3-5 min)
Step 4: in the meantime, add salt to taste
Step 5: flip and fry the rabbit evenly (3-5 min)
Step 6: take out the fried rabbit from the pan
Step 7: peel and chop the onion finely
Step 8: peel and chop the garlic finely
Step 9: fry the onion and garlic in the pan for about 2-3 minutes
Step 10: put the fried rabbit in the pan
Step 11: pour the soup into the pan
Step 12: add pepper and dried tarragon
Step 13: simmer the rabbit for about 45 minutes under the lid at a low temperature
Step 14: add the sour cream to the pan
Step 15: add the chopped dill and mix the ingredients
Step 16: boil the sauce just until it starts bubbling

The rabbit is not among the most consumed meats in many parts of the world and, therefore, the food recipes that contain this ingredient are not very many. However, there are also countries where the rabbit, especially the farm rabbit, is commonly consumed and people appreciate refined recipes with rabbit meat. Among the countries where a lot of rabbits are consumed, I mention Spain, Italy but also the UK.

Among the most popular recipes with rabbits are rabbit stew, fried rabbit in the pan, and rabbit cooked in the oven.

On this page, I’ll share with you a fried rabbit recipe that I like very much. I eat rabbits as many times as I can since both I and my daughter love this extremely delicious meat!

This fried rabbit recipe is, actually, a combination between a rabbit stew and a fried rabbit in the pan. As you can watch in the video, the rabbit is seared, then boiled, and finally, served in a tarragon cream sauce.

Being quite simple, I don’t have to share many secrets in regard to this fried rabbit recipe. I’ll underline that there is important to cut the whole rabbit into smaller pieces for better cooking. Also, I suggest boiling the fried rabbit pieces over a very low temperature to allow the meat to soften inside.

Finally, I recommend using a very good quality heavy cream to avoid turning sour when it comes in contact with the high temperature in the pan.

Wild leporids comprise a small portion of global rabbit-meat consumption. Domesticated descendants of the European rabbit (Oryctolagus cuniculus) that are bred and kept as livestock (a practice called cuniculture) account for the estimated 200 million tons of rabbit meat produced annually.[63]

Approximately 1.2 billion rabbits are slaughtered each year for meat worldwide.[64] In 1994, the countries with the highest consumption per capita of rabbit meat were Malta with 8.89 kg (19 lb 10 oz), Italy with 5.71 kg (12 lb 9 oz), and Cyprus with 4.37 kg (9 lb 10 oz), falling to 0.03 kg (1 oz) in Japan. The figure for the United States was 0.14 kg (5 oz) per capita. The largest producers of rabbit meat in 1994 were China, Russia, Italy, France, and Spain.[65] Rabbit meat was once a common commodity in Sydney, Australia, but declined after the myxomatosis virus was intentionally introduced to control the exploding population of feral rabbits in the area.

In the United Kingdom, fresh rabbit is sold in butcher shops and markets, and some supermarkets sell frozen rabbit meat. At farmers’ markets there, including the famous Borough Market in London, rabbit carcasses are sometimes displayed hanging, unbutchered (in the traditional style), next to braces of pheasant or other small game.

Rabbit meat is a feature of Moroccan cuisine, where it is cooked in a tajine with “raisins and grilled almonds added a few minutes before serving”.[66] In China, rabbit meat is particularly popular in Sichuan cuisine, with its stewed rabbit, spicy diced rabbit, BBQ-style rabbit, and even spicy rabbit heads, which have been compared to spicy duck neck.[63] Rabbit meat is comparatively unpopular elsewhere in the Asia-Pacific.

According to nutritionists*, rabbit meat is good for you! It’s both succulent and flavorsome, and the meat combines both healthy eating and good flavors.

With its qualities of tastiness and good nutrition, the rabbit has everything to satisfy gourmets who are concerned about their health. It is especially recommended for pregnant women and nursing mothers, for the young, the elderly, and even sports enthusiasts…

THE BENEFITS OF RABBIT MEAT

Lower in fat than many other types of meat, low in lipids (av. = 6g per 100g meat, notably the fillet and thigh joints).

A meat-rich in quality proteins (around 21g per 100g) is also lower in calories and sodium than the majority of other meats.

An excellent source of vitamins, minerals, and trace elements: High in vitamins B3 and B12, phosphorus, potassium, and selenium. It contributes to a good balance of vitamins and minerals for daily dietary requirements.

Meat with an excellent balance of fatty acids (rabbit is richer in omega 3 than chicken* or pork*. It has a moderate fat content (depending on the type of cut).

Enjoy the fried rabbit recipe in a sour cream sauce!