➡️ Are you searching for the best homemade potato soup recipes in 2022? On this site, you’ll discover how to make potato soup with egg drops from scratch in 11 steps at home in the Hungarian style. In most Central and Eastern European countries, the potato is a staple food since the large-scale cultivation of the potato began. Hungary is one of the countries where the potato is very popular and one of the favorite ways to cook it is in the form of soup.

➡️ Cooking Hungarian egg drops and potato soup is very easy and quick. The cooking method is quite simple and you don’t need any sophisticated ingredient except paprika, which is a mandatory ingredient for this recipe. Watch the cooking video below and learn how to make potato soup with egg drops using grandma’s homemade potato soup recipe from scratch!

Video – How to Make Egg Drop and Potato Soup from Scratch

What ingredients do you need for the homemade potato soup recipe with egg drops? How to make homemade potato soup from scratch?

1) peel potatoes off, then dice them into small cubes and place them into a high pot
2) add a few fresh celery leaves to the pot, then fill the pot up with water so that it is over potato cubes with about 2 fingers
3) place the pot on the stovetop over medium temperature and wait for the potato soup to start boiling
4) in the meantime, season this homemade soup with salt to taste
5) while is boiling, peel an onion off and chop it finely
6) put the onion into a frying pan, pour over it some sunflower oil, then fry the onion over high temperature until it’s slightly golden, in the meantime season it with some salt to taste
7) add paprika and fry onions for about 15 seconds more while stirring ingredients vigorously
8) when the potato is soft, add fried onion to the pot, mix, and wait for the soup to boil for about 5 minutes more over low temperature
9) break eggs into a glass, add some salt, and mix them well by hand
10) pour eggs into the pot in small amounts while stirring continuously to form egg drops
11) boil the homemade potato soup for 1-2 minutes more to harden egg drops

➡️ Soup is a mostly liquid dish that is typically served warm or hot and is produced by blending meat or vegetable ingredients with stock, milk, or water. Hot soups are distinguished by heating solid components in liquids in a pot until the flavors are extracted, resulting in a broth. However, there are also cold soup recipes.

What is potato soup?

➡️ Potato soup is a type of hot soup whose main ingredient is potatoes that can be cooked with other vegetable ingredients or with various types of meat. It’s one of the most popular soups in Europe and North America, especially in the United States and Canada.

➡️ No doubt, potato soup is one of the most popular soup recipes in the US, UK, Australia, Canada, and other countries. There are available, probably, hundreds of soup recipes with potatoes. Many of them include vegetables and meat. Other recipes, just like the one shared on this page, are simple and include just basic ingredients.

➡️ The egg is another ingredient that is often cooked along with potatoes. So, egg and potato soup is a natural combination. This is, probably, the reason why this soup type is so much appreciated in Hungary.

➡️ Many people like to cook soup with potatoes, especially during winter when the low temperatures make people craving after hot food to warm them up. Even if this soup with egg drops is pretty nourishing, it’s still a vegetarian soup, so you can serve some main dish, with or without meat, after eating it.

➡️ You can serve this homemade potato soup plain or you might add a tablespoon of sour cream on the plate and several pickled hot chili peppers, just like I do. In this way, the soup becomes more appetizing and for sure will raise your body temperature! 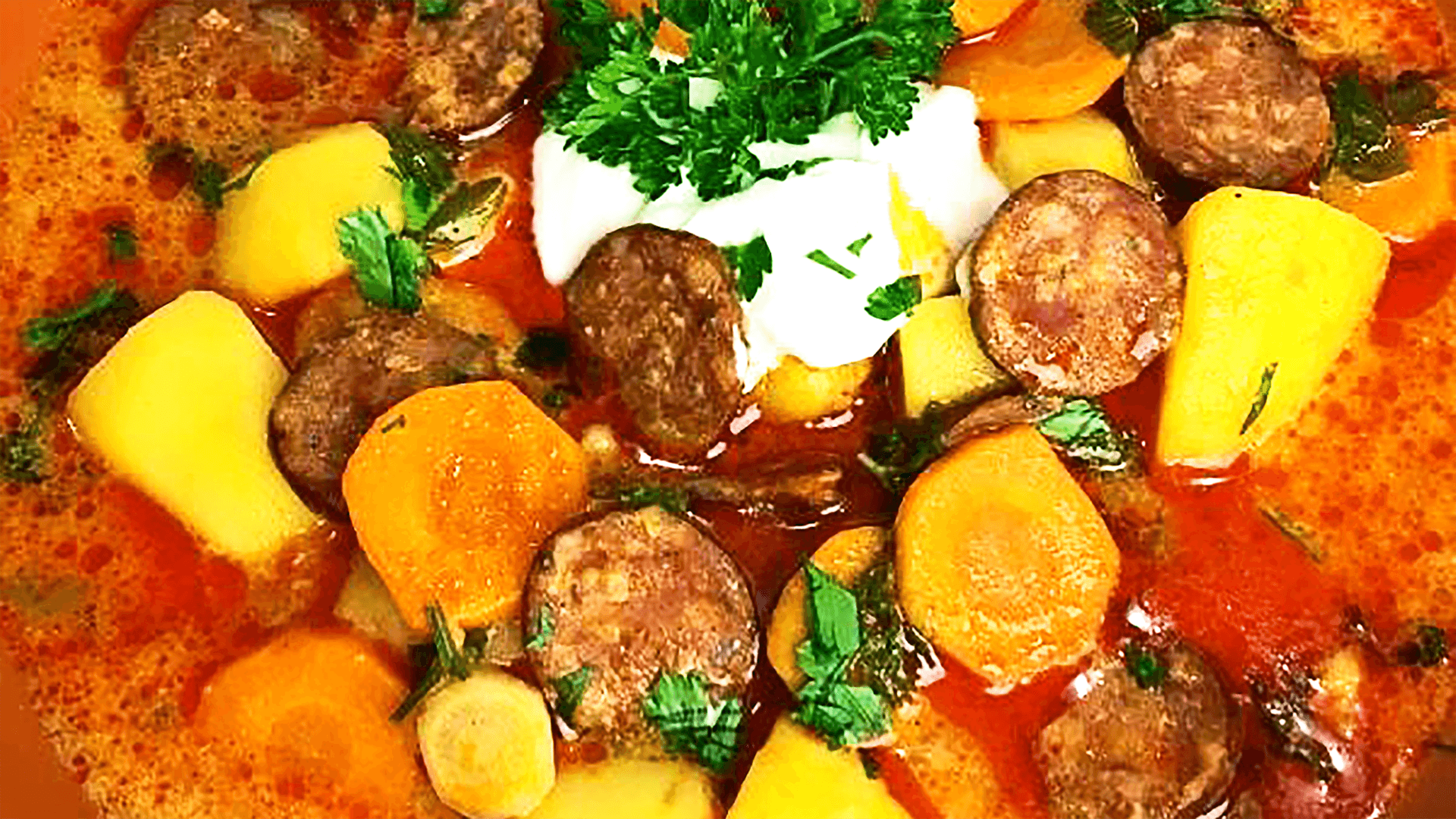 Looking for authentic Hungarian sausage and potato soup recipes in 2022? On this webpage, you…
➡️ Read More