Have you ever wondered how to make a vegan mushroom gravy? Personally, I am not a fan of vegan cuisine, but there are people who, for various reasons, want to consume just vegetable products and are looking for recipes that contain only vegan ingredients.

On this page, I share a recipe for vegan mushroom gravy which, despite its simplicity, is particularly tasty and requires a short time spent in the kitchen to prepare it.

This sauce can be consumed simply as it is or it can be served with a crispy piece of bread next to it. However, it goes very well with boiled rice, boiled pasta, or boiled potatoes, to name just a few obvious possibilities.

Learn more below about cooking the vegan mushroom gravy recipe! 👌

👌 How to cook mushroom gravy from scratch 📺

Home cooking can often only mean preparing dinner and/or breakfast. When cooking at home, you control the ingredients and how they are used, which can produce delicious, healthier, and often cheaper foods using the same ingredients as when prepared in a restaurant.
In cooking, the definition of the word “homemade” may vary from person to person, but in most contexts, the word refers to food that was prepared using ingredients that were originally purchased from the store. For example, if you buy ground beef and make a hamburger at home, it can be said that it was “homemade”.

Vegan mushroom gravy is a great alternative to the traditional beefy variety. My easy vegan gravy is made with mushrooms, onions, garlic, aromatic herbs, vegetable soup, and a touch of cornstarch to thicken it up.

It’s great on everything from toast to potatoes to mashed potatoes, but it’s also perfect as a dipping sauce for grilled vegetables or as a crunchy salad dressing!

Below are listed the needed ingredients and the cooking methods.

➡️ What ingredients do you need to cook vegan mushroom gravy? ❓ (recipe for 6 servings) 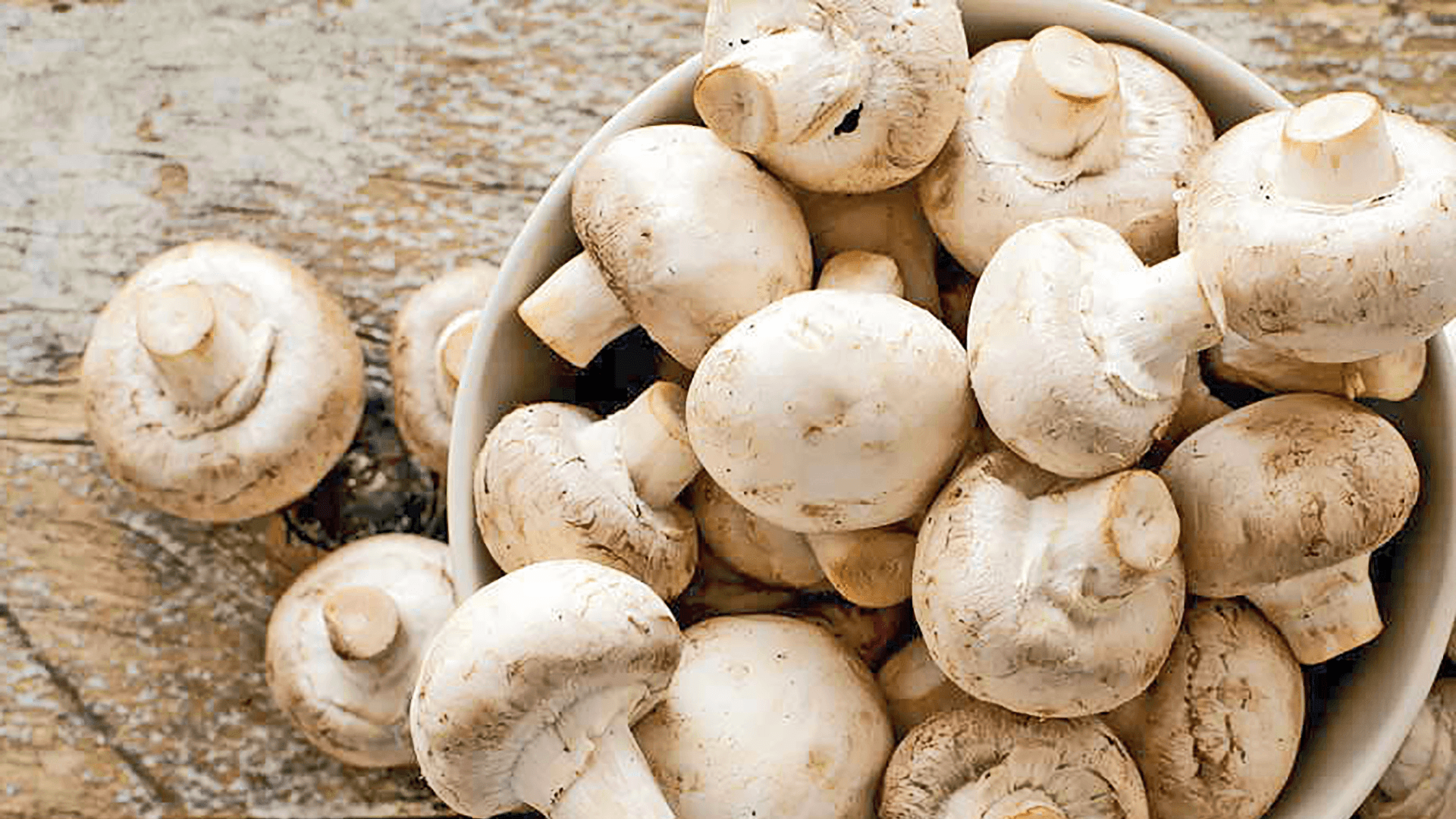 Print the list of ingredients for this food recipe from HomemadeRecipesfromScratch.com!

➡️ How to cook vegan mushroom gravy from scratch? ❓ 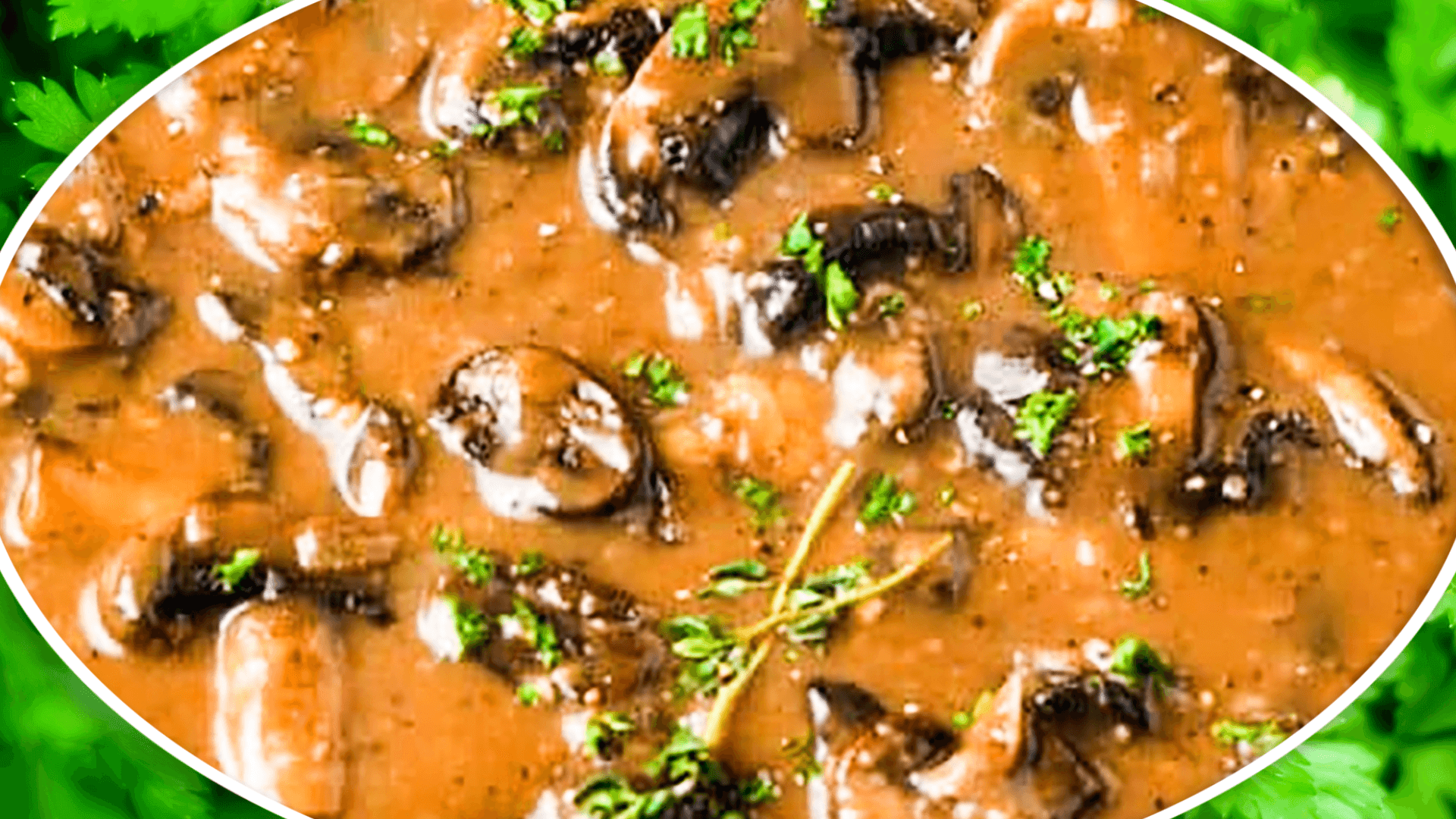 Wash the mushrooms very well, drain and slice them into medium pieces the larger ones, keep the small ones as they are.

2) Prepare the other vegetables

Peel and finely chop the onions and garlic cloves.

Place a frying pan on the stove over medium-high temperature, add the mushrooms and 2 tbsp of olive oil, then mix and fry until slightly golden (about 10 minutes.)

Add the chopped veggies to the pan and the rest of the oil, season with some salt to taste, and continue frying until the onion is glassy (about 5 minutes.)

Add the paprika to the pan and continue frying for about 30 seconds while stirring continuously.

Pour the vegetable broth into the pan, reduce temperature to low, add ground black pepper, Provence spice mixture, and thyme, then simmer the ingredients until the sauce drops pretty much (about 10 minutes.)

Add cornstarch depending on the sauce thickness and your taste, mix the ingredients, and continue simmering for about 3-5 minutes or until the gravy has a creamy consistency.

8) Top the gravy with fresh parsley

Chop the parsley leaves and top the gravy for more flavor and a spectacular look.

➡️ 10 PRO tips for cooking the vegan mushroom gravy recipe like a chef! 🔎 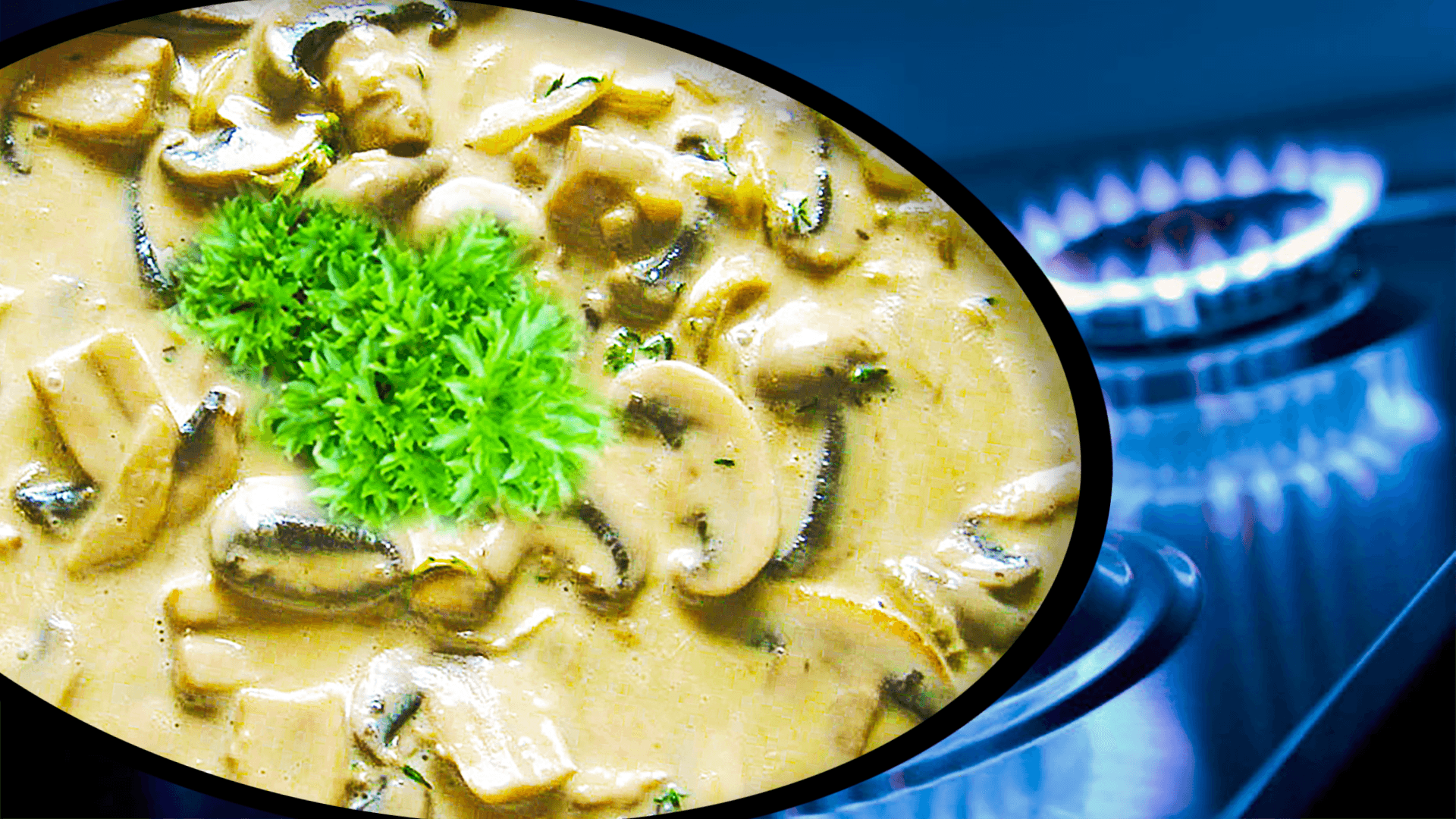 Nowadays, it seems that most people prefer a mushroom sauce with sour cream, although there are excellent recipes for brown mushroom gravy, very simple and easy to cook. Such a recipe for a mushroom sauce without cream I share on this page and I warmly recommend it because it fits very well with a lot of other dishes that make them worthy of a gourmet! 👌 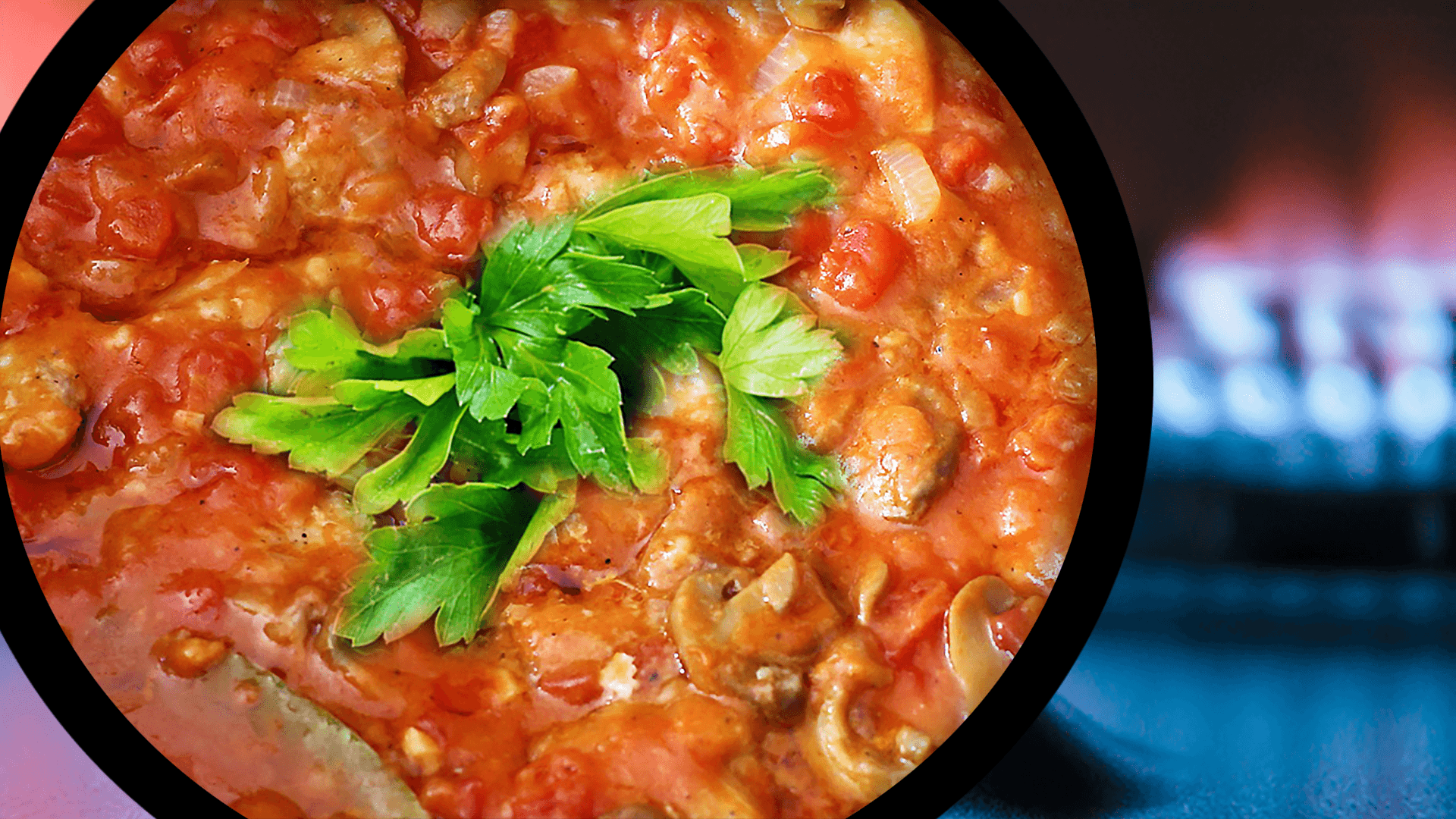 🔎 What are homemade meals? ⬇️

Homemade meals are dishes prepared using fresh and natural ingredients to create your meals and snacks at home. The benefits of making your own food are endless, from saving money to finding out exactly what is in your food and having control over what you eat.
But the biggest benefit of all is that it gives you the opportunity to create your own recipes and choose the ingredients that go into them. This means you can create homemade meals that are tailored to your health needs and culinary preferences!

➡️ What is mushroom gravy? ❓

Mushrooms are a very interesting type of fungi. There are different kinds of edible mushrooms, and each one has its own flavor and nutritional value.
Mushrooms are used in cooking and eating for a very long time, being probably among the first foods cooked by humans.
Mushroom gravy is a simple dish that can be made with a variety of ingredients. It is like a mushroom sauce but it’s ticker because of the addition of flour or starch.
Most mushroom gravy recipes use cremini mushrooms, champignon mushrooms, and portabella mushrooms, but many other mushroom types are suitable to cook the gravy.
Among other typical ingredients used to cook mushroom gravy are onions and garlic, both offering the aroma and consistency of mushrooms.

➡️ What are the health benefits of eating mushrooms? ❓

There are many health benefits of eating mushrooms: they have high levels of vitamins and minerals, including selenium and B vitamins.
Additionally, they also have high levels of antioxidant compounds, including polyphenols and beta-glucan.
They help lower blood pressure, which can reduce the risk of heart disease and stroke.
Mushrooms may even help prevent cancer and neurological disorders such as Alzheimer’s and dementia.

Gravy is what you get when you cook meat or vegetables in liquid. It’s one of the oldest known sauces and it’s still used today to add flavor to many dishes. You can use the gravy to make a variety of dishes.
The finishing touch on many dishes is a thick, creamy sauce or saucepan of gravy. This may contain any combination of meat juices, flour, milk, and other flavorings.
Gravy is often used over the top of a roast or other savory dishes. It can also be used to make a sauce out of a specific type of meat or vegetable, such as mushroom gravy.
“Gravy is a condiment, often made from the juices of meats that run naturally during cooking and often thickened with wheat flour or corn starch for added texture. The gravy may be further colored and flavored with gravy salt (a simple mix of salt and caramel food coloring) or gravy browning (gravy salt dissolved in water) or ready-made cubes and powders can be used as a substitute for natural meat or vegetable extracts. Canned and instant gravies are also available.[1] Gravy is commonly served with biscuits, roasts, meatloaf, rice,[2] noodles, chips (fries), and mashed potatoes.”
📖 Read more on Gravy!