Learn in this cooking video how to make vegetable chicken soup using a tasty and easy homemade soup recipe from scratch!

Do you like chicken soup? Write your reasons briefly!
0
Please leave feedback on this!x 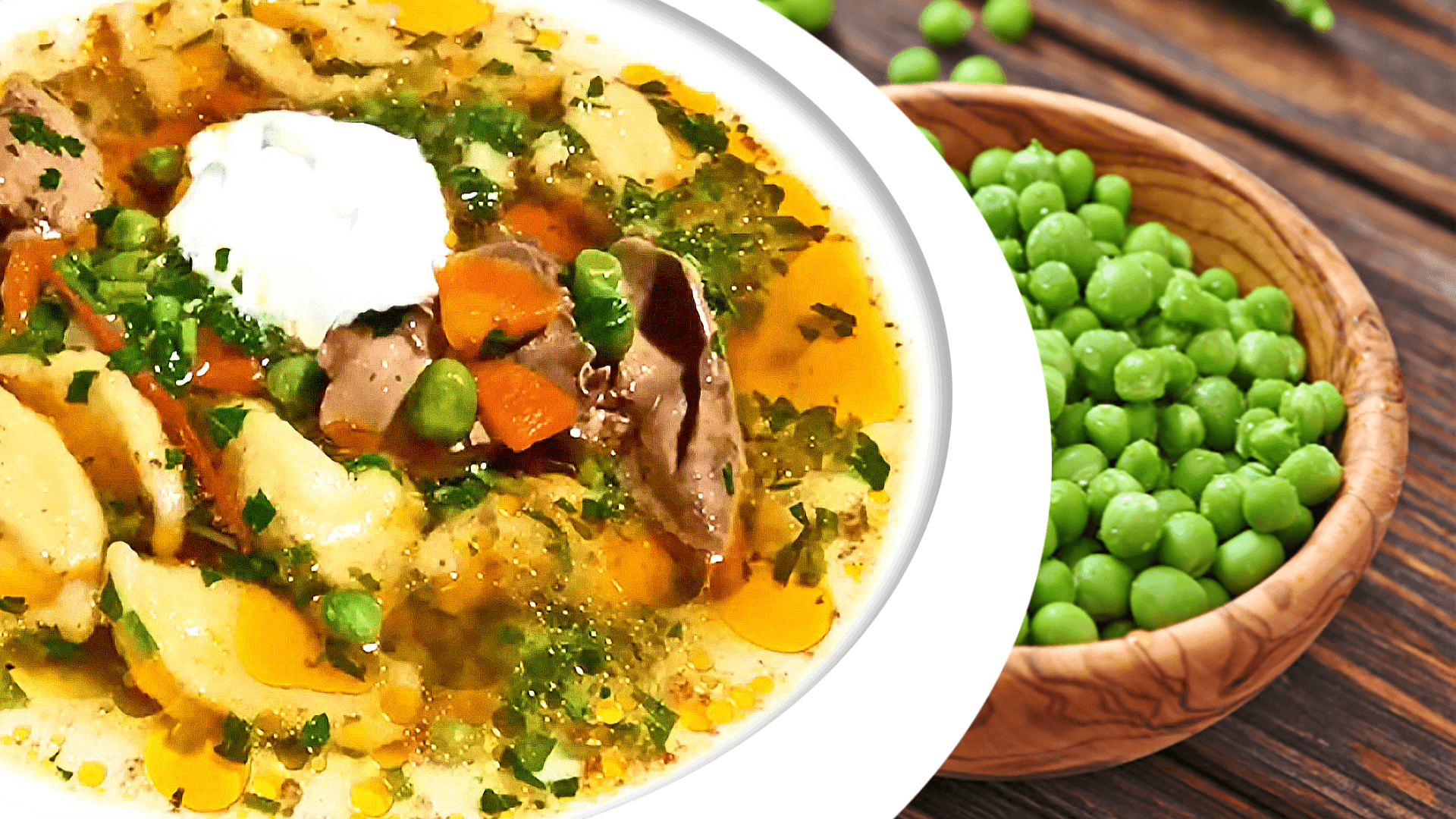 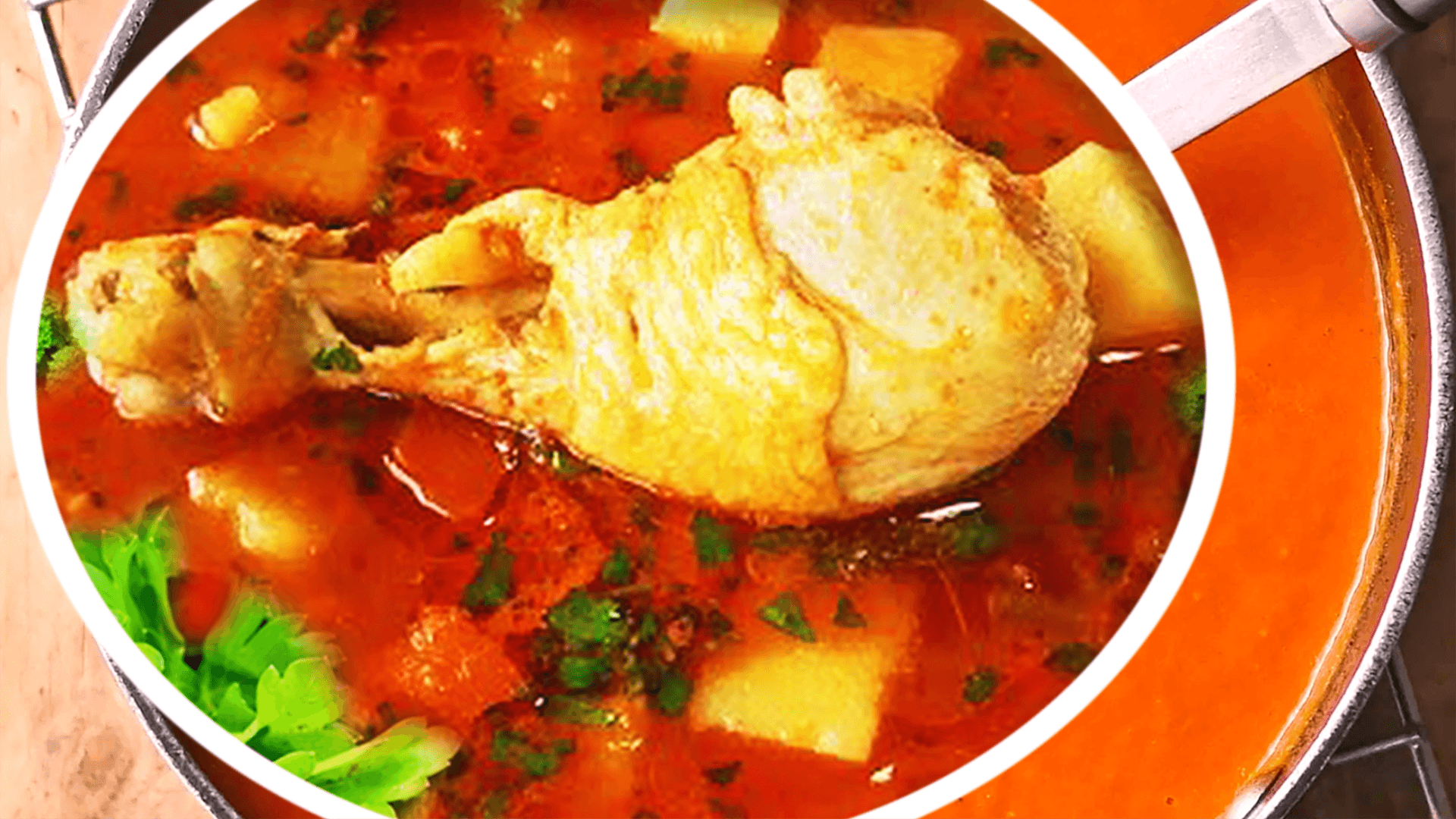 ➡️ What ingredients do I need for the vegetable chicken soup recipe? ❓ 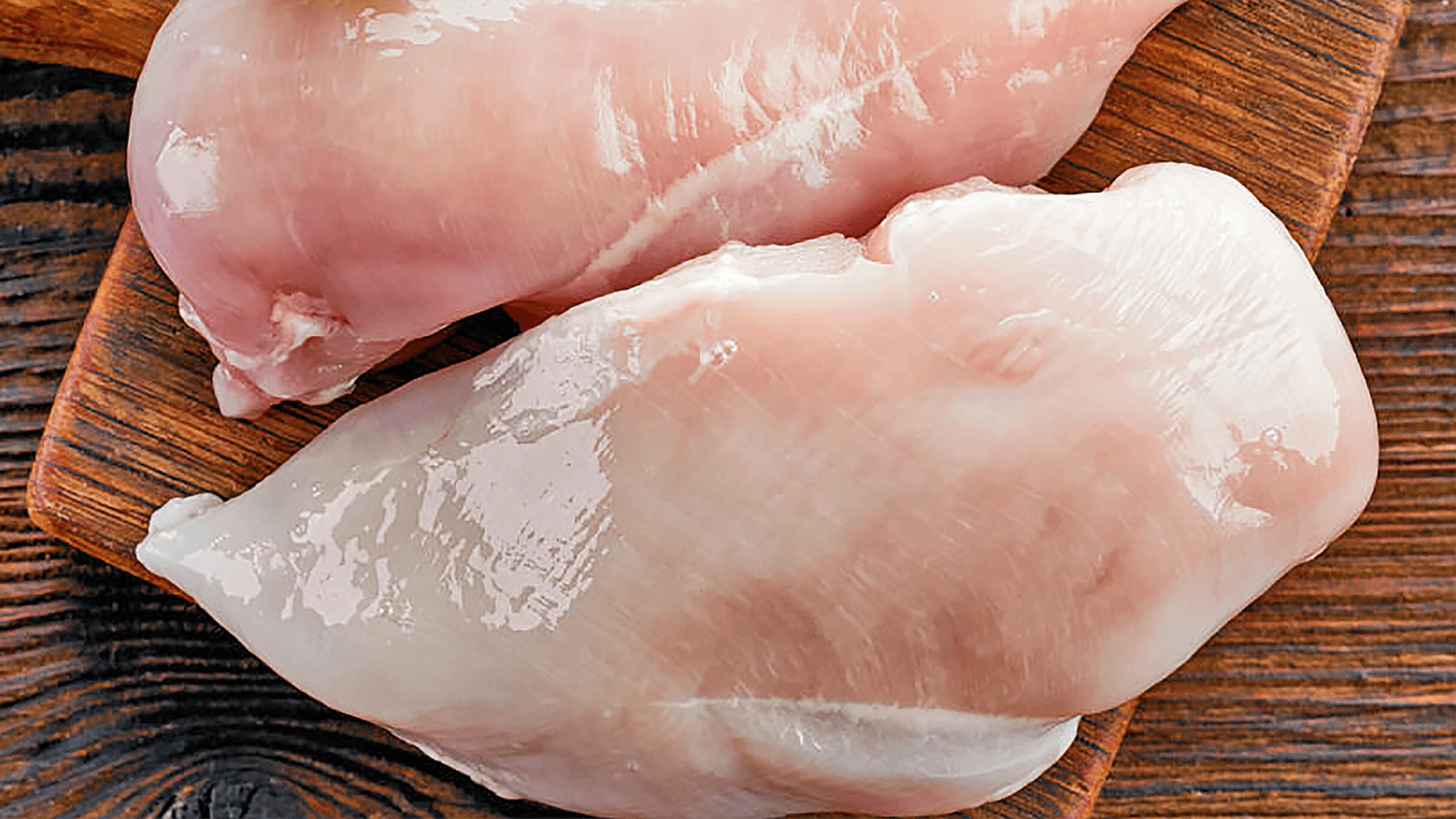 ➡️ How to make a vegetable chicken soup from scratch? ❓ 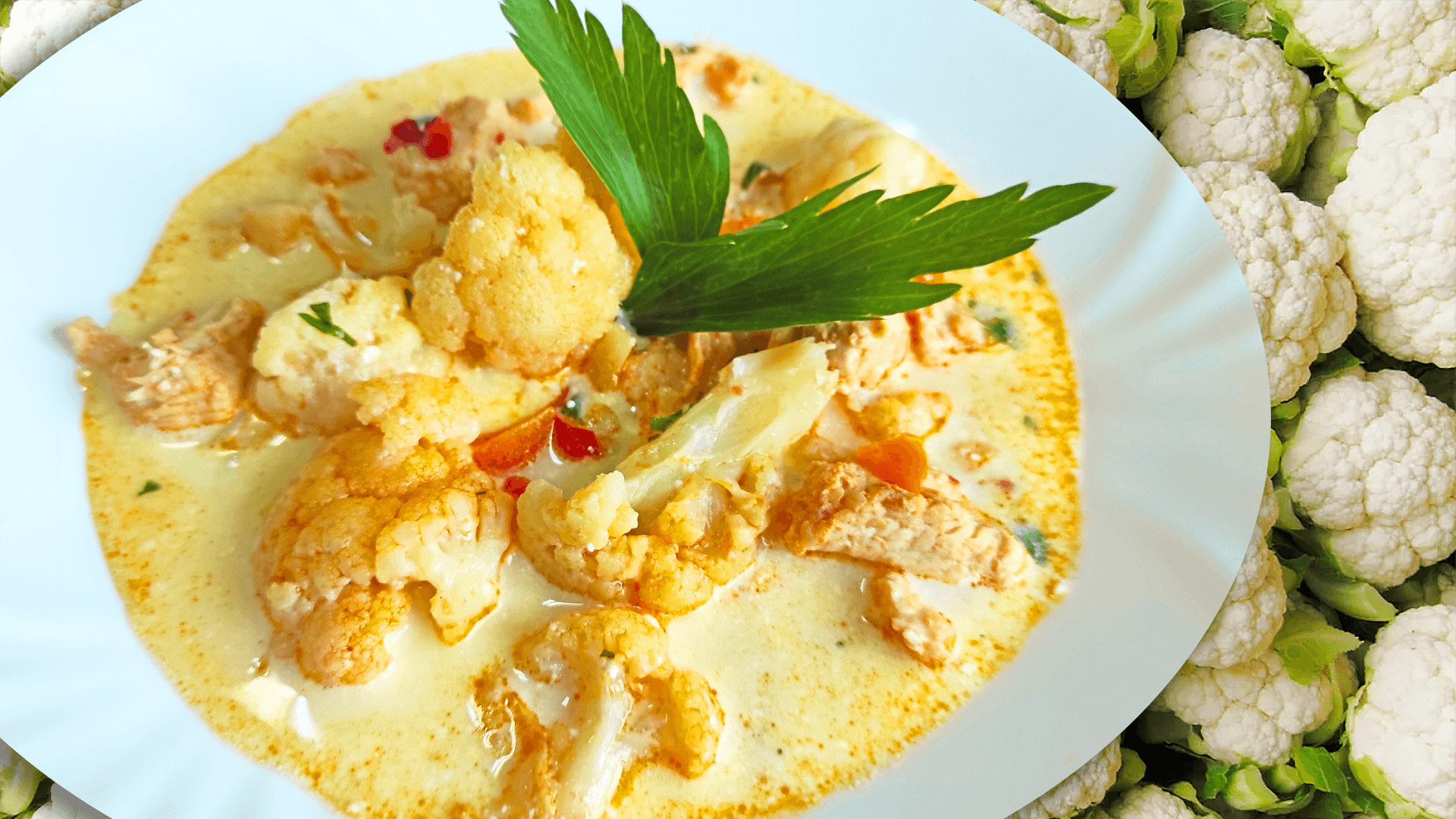 Step 1: pour oil into a large pot and wait to heat up over a very high temperature
Step 2: do add carrots and parsnip root
Step 3: season with salt or salted pepper paste, mix
Step 4: do add the chicken breast pieces
Step 5: do add the onion and bell pepper
Step 6: pour 0.5 l/17 fl oz of water and boil for 10 min
Step 7: do add tomatoes and boil for 5 min
Step 8: do add cauliflower bunches
Step 9: reduce temperature, fill up the pot with water, and simmer for 30 min
Step 10: do add chopped parsley leaves, mix
Step 11: do add egg yolks over sour cream into a bowl, mix
Step 12: pour a bit of soup broth and mix well
Step 13: pour the mixture into the vegetable chicken soup and combine ingredients

On this page, I share a homemade soup recipe that all family members love. Its main ingredients are chicken breast and cauliflower, which fit perfectly together and help you cook a very nutritious and delicious soup.

I have no secrets to share with you in regard to this recipe since the preparation of the soup is very simple. As such, you do not need too much cooking experience to get the best results. The preparation time is short and the ingredients are basic and easy to find everywhere. Therefore, I recommend you to cook this chicken soup as soon as possible, I assure you that you will not be disappointed!

You know the answer to the question “what is chicken soup?”. If you are not very clear about cooking a chicken soup, read more information below.

Chicken soup is a soup made from chicken, simmered in water, usually with various other ingredients. The classic chicken soup consists of a clear chicken broth, often with pieces of chicken or vegetables; common additions are pasta, noodles, dumplings, or grains such as rice and barley. Chicken soup has acquired the reputation of a folk remedy for colds and influenza, and in many countries is considered comfort food.[1]

Variations on the flavor are gained by adding root vegetables such as parsnip, potato, sweet potato, and celery root; herbs such as parsley and dill; other vegetables such as zucchini, whole garlic cloves, lettuce, or tomatoes; and black pepper. The soup should be brought slowly to a boil and then simmered in a covered pot on a very low flame for one to three hours, adding water if necessary. Saffron or turmeric is sometimes added as a yellow colorant.

Traditionally, chicken soup (or broth) in Britain is a clear and watery soup with chunky vegetables (such as carrot, celery, and onion), chicken, salt, and pepper. However, a thick, creamy variety called cream of chicken soup, which may not contain any vegetable pieces (depending on the recipe) is more popular today. A distinct version from Scotland that has become popular throughout the UK is cock-a-leekie soup, a clear, thin broth of shredded chicken and leeks.

The United States and Canada

In the United States and Canada, chicken soup often has noodles or rice in it, thus giving it its common name of “chicken noodle soup”.[29] The term may have been coined in a commercial for the Campbell Soup Company in the 1930s. The original 21 varieties of Campbell’s condensed soup featured a “chicken soup with noodles”, but when it was advertised on the Amos ‘n’ Andy radio show in the 1930s by a slip of the tongue the soup was referred to as “chicken noodle soup”.

Traditionally, American chicken soup was prepared using old hens too tough and stringy to be roasted or cooked for a short time. In modern times, these fowl are difficult to come by, and broiler chickens (young chickens suitable for roasting or broiling) are often used to make soup.

If you are not convinced that chicken breast offers many benefits to your health, read the information below.

What Are the Health Benefits of Chicken Breast?

This type of poultry is an excellent source of lean protein. Chicken is also a good source of vitamin B, vitamin D, calcium, iron, zinc, and trace amounts of vitamin A and vitamin C.

In comparison to most red meats, chicken contains two to three times more polyunsaturated fat and monounsaturated fat—healthier fats than those found in red meat. Chicken also has a total carbohydrate count of 0, no trans fat, and is low in sodium. It is not a source of dietary fiber.

Nutritional and Flavor Differences Between White and Dark Meat

There are two types of meat in every chicken—white and dark meat—which vary in color, flavor, and nutritional value. These distinctions are due to the type of muscle and use of that muscle. Dark meat comes from the chicken legs, which are put to work frequently and require more oxygen, whereas white meat comes from the parts of the chicken that get less exercise, like the breast and chicken wings.

Dark and white meat chicken are both equally good sources of protein and B vitamins, however, they differ in calories, fat content, and minerals. While white meat has less fat and fewer calories than dark meat, the majority of chicken fat lives in the skin rather than the meat, so the main source of fat and calories of dark meat chicken comes from the skin that covers pieces like the drumsticks and thighs. Dark meat chicken tends to be juicier and a better source of iron and zinc due to the increased oxygenation of those muscles.